It was Austin in mid-March. That can only mean one thing: South by Southwest.

After an unusually rainy week, the clouds finally parted. John and I put the developers to bed and slipped out into the balmy Texas night to track down some music. Hours later, we found ourselves perched in the smoky wings of one of the countless blues bars that dot Sixth Street. The sort of place with one bathroom, folding chairs and a drain in the center of the floor. After every song, we’d fist bump and remark at the unbelievable talent in our midst. Suddenly, a man appeared at my side.

Severe in a Miles Davis kind of way, he sat much too close and stared directly at us with huge, unblinking black eyes. Not sure about John, but I assumed this man was a musician and perhaps we’d been made a part of the act. As quickly as he had materialized, the stranger produced a pad of cheap paper and a ballpoint pen. He began scrawling furiously, pausing from time to time to do cartoonishly artistic things like holding up one thumb, closing an eye, and sticking out his tongue. We were being drawn by the Pablo Picasso of the honky-tonks. He finished, and gazed approvingly at his accomplishment. Only then did his intention become clear. With dramatic flourish, he spun around the spiral-bound canvas and offered to sell me this fresh masterwork. I’m sure John and I gave him a few seconds of our tough guy routine, but I caved quickly and went along with the sales pitch. Needless to say, I’d sampled a few of Austin’s buttery bourbons and gleefully handed him a wad of bills from my pocket. I’m a patron of the arts, after all. We ordered our enterprising friend a drink and had a few laughs and he was off to find his next target as the eastern sky grew red.

Now—not even nine months later—John’s body is in the ground, stolen away by cancer. He was my friend and colleague, and in many ways, my mentor. He was, without a doubt, one of the most gracious people I’ve ever known. It’s only been a couple of weeks and I’m still adjusting to a world without him. It’s a little colder and lonelier than I’m used to. Cleaning out a drawer earlier tonight, I discovered a rolled up sketch and fresh tears sprang to my eyes. I have no idea what I paid that bar-hopping bon vivant for this portrait, but it’s suddenly worth much more. 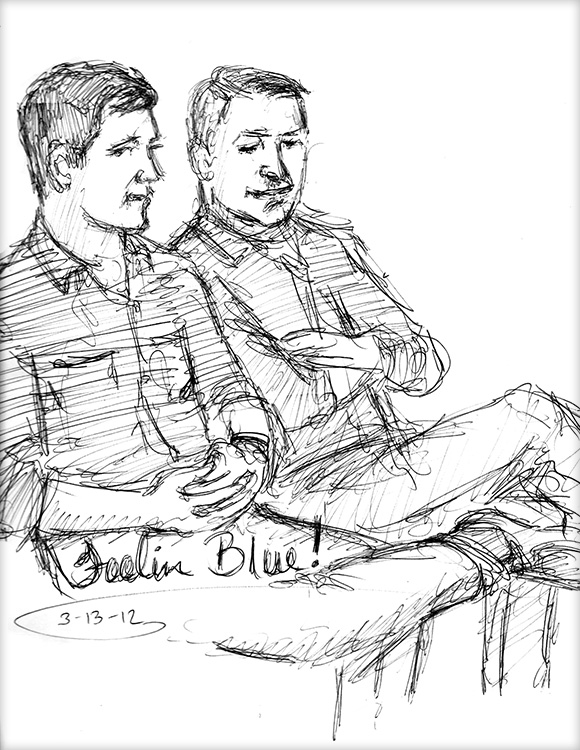 One Reply to “Feeling Blue”

I’m a principal and studio director at Journey Group. We’re an independent design company based in Charlottesville, Virginia. My focus is service design and, specifically, the use of integrated technologies within institutions. I’m also on the board of The Content Council, spiritual director for Jack’s Sally Motorcycle Club, husbandman at Dawnbreak Farm, and a student at Umbau School. Occasionally, I get opportunities to write and speak about the cultural and ethical implications of designing for a living. Send along a note if you'd like to chat.